Music to triumph over monsters by. Free, of course, like the book.

Get your fight on.
Posted by William Vitka at 12:15 AM No comments:

Will be in pieces. Thanks to an awesome idea by Ted B. A little here. A little there. Until BOOM! The full glory.
Posted by William Vitka at 9:36 PM No comments:

So, here's the current question: When do I reveal the cover for my forthcoming scifi novel STRANDED? Obviously, it looks awesome, since my brother does not produce crap.

But when do I do it?

Ye gods. Someone halp.
Posted by William Vitka at 4:40 PM No comments:

Update: Mr. Shane Vidaurri just contacted me. He sent along a particularly nice email, which I won't quote here because I'd rather not violate the personal nature of the note. But he reached out, and rather kindly, expressed his regret that we were offended. For the record, I don't believe Mr. Vidaurri himself said anything rude to us. And, moreover, his effort to reach out speaks volumes about him. It is appreciated. I've slightly amended the text below to reflect that. I'll gladly shake Mr. Vidaurri's hand when our paths cross next. The rage post below is not directed at him, at all. And, in fact, I apologize for including him originally. Hell, he should join the Kindle All-Stars with us.

Arch Enemy, can I get an opener?

Whether you like it or not, we will rise.

Me, Bernard Schaffer and Alexander Maisey had a wonderful time today speaking together at Philadelphia Comic Con on a panel about independent writing and publishing. We missed our comrade-in-arms, Michael Shean. Though he was there in spirit, and nameplate. 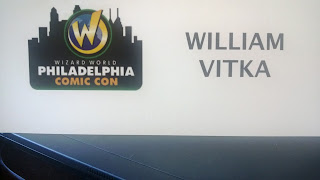 And I gave out a lot of these: 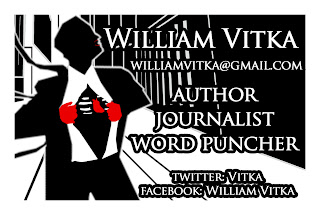 I am lucky enough to have a brilliant brother who designs my artwork. And I tried to promote my partner Jessica's editing services, because she's similarly brilliant and I am similarly lucky.

(guzman.editor@gmail.com for your editing needs, kids!)

It was wonderful. Really, truly wonderful. Especially the crowd (without them, who are we? These are people endeavoring to be writers. Hell, most were writers just looking to learn some more. The world needs more!). Even if we three (totally new to speaking on a panel) were a bit scattershot.

The crowd was earnest. They asked questions. And, bless em, they were patient as we stumbled through our answers to their questions. Though I'll apologize now because 45 minutes is simply not enough time to get through everything.

And like I said, we're rather new at this panel business.

But whoever was there, we meant it when we said: Contact us. Email us. Twitter us. We've been through the crap, all the shit, and we want you guys to succeed with us. So ask us more questions!

Indie writers need to stick together. For at least one rather depressing reason:

The panel before us was the old guard, so to speak. Folks who, to varying degrees, had gone through the rigmarole of 'traditional' publishing:

"COMPELLING STORYTELLING
Whether you are a seasoned writer or a brand new one, the journey of writing a compelling story is a tumultuous one. Creative writing is often fill with all kinds of discouraging land-mines or creative dead-ends. Hear from Bob Layton (Iron Man; Uncanny X-Men; Avengers; Captain America; Batman), Shane Vidaurri (Iron: Or, The War After), Daniel Boyd (Chillers; Paradise Park) and Rebecca Housel (The Pop Culture Professor) as they share some of their secrets to not only completing a compelling story but also how to develop habits to be a more effective writer. (ROOM 109)"

Except, ye gods, were they some of them rude. I've met scores of traditionally published writers who were wonderful. But these folks ... They a couple of these folks lacked any humility or grace or just courtesy ... At least when dealing with filth like us independent writers. They went over time. They Someone openly dissed us before leaving. One -- the voice was feminine, and I can't say for certain who it was, as I had my back to them and was carrying twenty pounds of books -- said with alarm when I stood next to a walker: "Get away from that."

As though I was going to steal it. Or perhaps graffiti it.

Since I am a filthy indie pulp author and clearly not to be trusted.

It was a bit like marching into war. Because we hadn't done anything. We were just snidely attacked. We're not even going as far as 'Don't Tread On Me.' More like 'Don't Shit On Me.'

Maisey has a particularly funny, and poignant, writeup here.

"What pissed me off was twofold.  After running ten minutes over their allotted time, the host of the prior panel was asked to announce our panel since the crowd they had gotten clearly had an interest in writing and might be interested in what we might have to say.  He got on the mic and mumbled, “Hang around for the Independent something,” and walked away.

I asked a simple question of the members of the prior panel as our group entered the hall, not knowing their identities.  (It’s worth mentioning that none of their names struck a bell after I did find out who they were; a Google search at home cleared that up and did not impress.)  I asked, very simply, “Are you writers, too?”
They literally guffawed at me in that, “This guy doesn’t know who I am” way.  One snickered, “You could say so.”  His particular curriculum vitae includes a number of comic books for a company that failed terribly in the late nineties and little else afterwards ... "We have places to be," announced a [person who writes 'serious' 'philosophical' bullshit about Twilight and True Blood]."

Go read it.
It gets better, too.

But there are two possibly alarming issues at play here. One is: Either they love sniffing their own farts and really truly believe they are the gold standard (and let me put it this way: We weren't going on after Stephen King or Elmore Leonard -- both of whom are wildly successful and, as it happens, wonderful people who don't act like snobs).

OR (and this just gives me fuzzy feelings of war):

I don't need them and they don't need me. Eat a dick. Perhaps a bowl of dicks. Maybe even a goddamn bushel of dicks. (But I don't want you to get too full, so watch your dick intake, all right? Scarf only as many dicks as makes you feel satisfied. Do not over-dick. As a friend points out: The FDA recommends eating only 6 to 10 dicks a day.)

But more importantly: We don't need them. We indie authors can stand up for ourselves. And we can kick ass by ourselves. Especially not if their reaction to new, up-and-coming writers is some kind weird, smug derision.

Indie writers don't have the luxury of hiding behind anything. Any publication or publisher. We are the beginning and the end of ourselves. Not uroboros. Alpha and Omega. We can't blame anyone, because we are the only people accountable for our work.

So, all right. You want to treat us like dirt? We'll be proud in the filth. But we'll still fight. And we'll write. And you'll keep opening for us at panels.

You want to be scared? That's all right, too.

We'll give you something to be scared of.

Except Mr. Vidaurri. He's a stand-up fellow and just an awesome dude.
Posted by William Vitka at 12:57 AM 7 comments: